Never afraid of switching the party up a notch, Montreal’s Regularfantasy dances that fine line between all-out-fun and sentimental nostalgia, fusing fluffy late 90s-early 00s filter house with deep burners and catchy vocals from records that sound familiar but you just can’t quite put your finger on it. With a myriad of projects on the go and a killer new record just out alongside her Plush Managements Inc. partner in crime D. Tiffany, we caught up with Liv via her Montreal doggo painting studio to get the scoop!

Hey Liv, thanks for checking in with us.. what’s happening over your way? How were the warmer months for you guys in Montreal?

This summer in Montreal… there were a lot of park hangs and going to outdoor pools and swimming holes around the city. I did spend a lot of time sweating and stressing most of the summer. In light of that, my friends and I started a fitness club that we called “Pump Pump” which met every second day (sometimes more) to do some fitness in the park. Some people just joined in for the social aspect towards the end, and the club eventually morphed into “Plump Plump” where after we would get ice cream, eat snacks, order food to the park, and BBQ at sunset. Lots of bike rides, there were some outdoor music events which I attended, but not too many, it’s been pretty solid lockdown since day 1.

What kind of music have you found yourself both listening to and producing at home during this strange isolated year we’ve had?

I was working on some remixes and some vocal tracks. Over the past few years I haven’t been flowing with the lyrics and songs so much, but I wanted to bring back the classic Regfant songwriting style, so I did “Running Around” which just came out on These Things Take Time, and “Lovely” is coming out soon on a vinyl only label from Amsterdam. I really love pop remixes and there aren’t enough, so I’ve found that that has been a good mode of expression, let the acapella speak for us all. 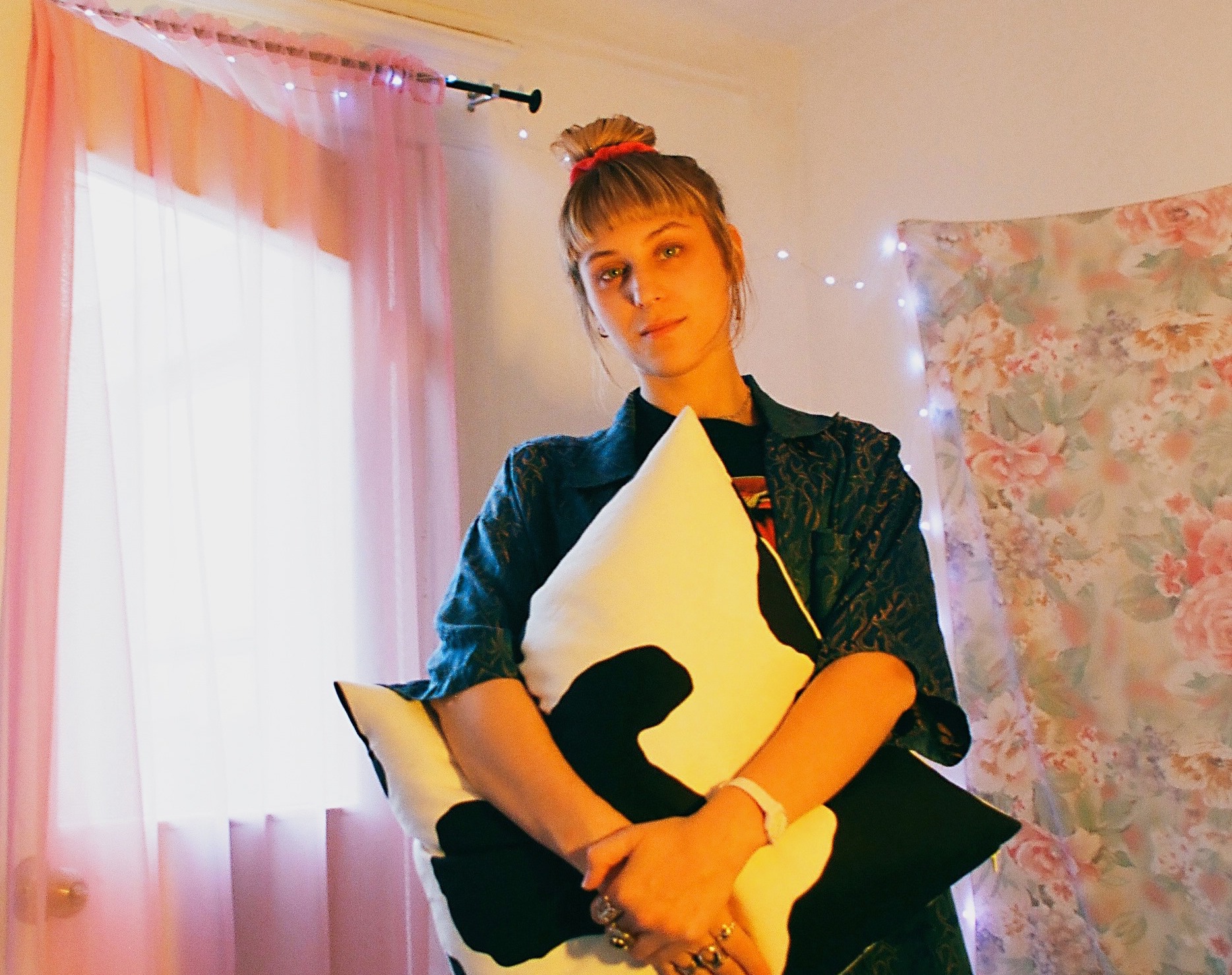 I see you’ve been keeping the creative juices flowing in other ways too with some new art projects on the side, painting fashionable doggos and the like.. what can you tell us about that?

Well…. Somehow this doggo painting thing had become a full on hobby. I did my undergrad in Visual Arts and specialized in painting, but I was more interested in music so I never really pushed it with painting. It’s been really nice to get back to it, although difficult, I find it relaxing and rewarding. I think that one thing I like about music is connection with people, so it was nice to do with painting where I could make something meaningful for someone, and that has longevity. I also took up gluten free baking. I was already into it but now I’m really into it. Feel free to check out my sketchy cookies and GF memes on @_gf_af. In fact – I’m waiting for my black bean chocolate chip cookies to come out of the oven right now! 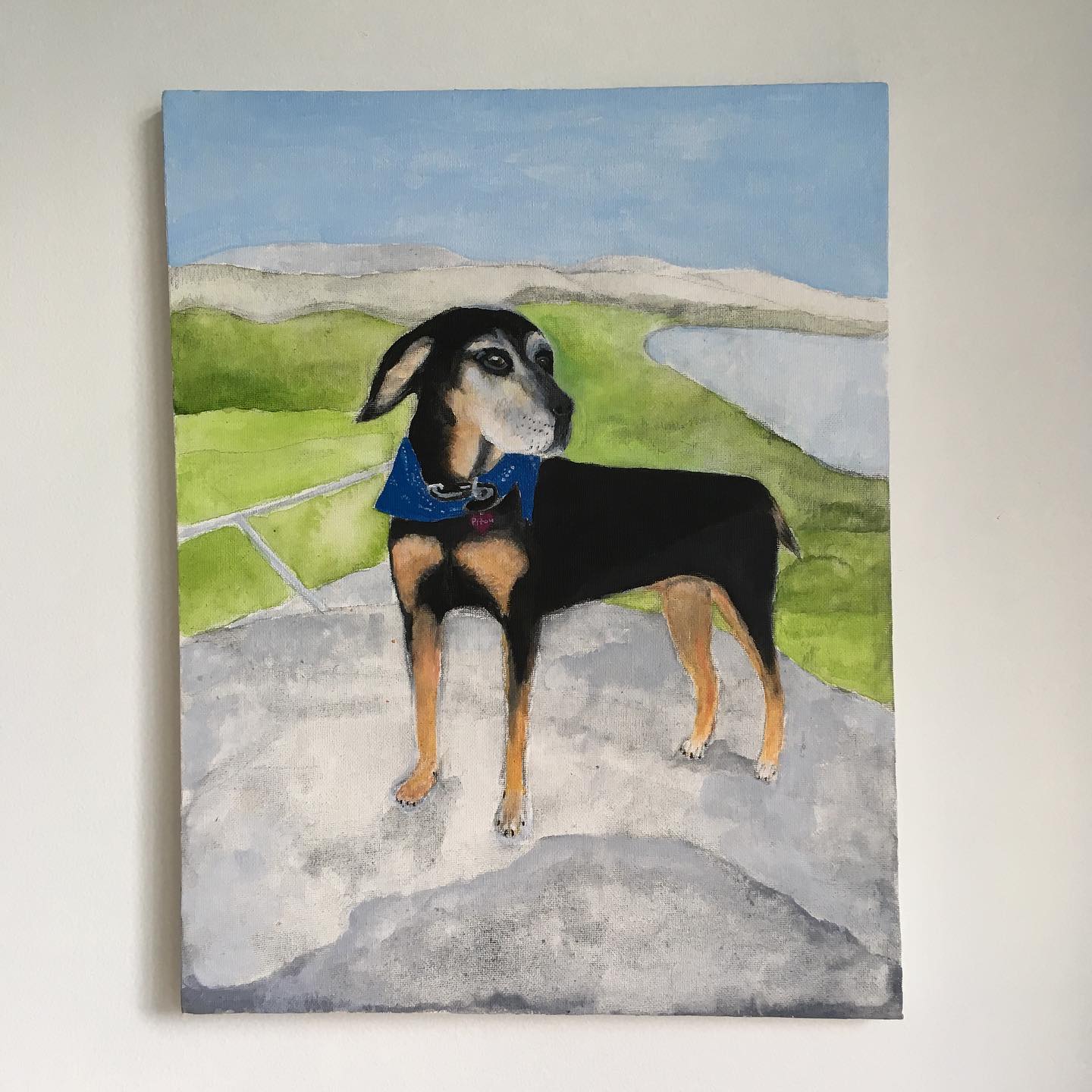 I read that you were in an R&B band when you were younger, what kind of groups were you guys influenced by at the time and how far did you go with it all?

Ah yes, in high school I was in the Vic High “R&B Band” but it wasn’t the A band, it was the B band (because I wasn’t good enough for the A band). We would meet every other week and do covers of R&B songs, with choreography and harmonies and all that, and performances with the A band. I was all into the classic rock choir, I somehow became a soprano singer by the end of it. I didn’t continue much further than that….

I wish so bad I could be in school funded clubs and ensembles. I loved the structure. Every Tuesday and Thursday we had choir at lunch and sometimes after school and on weekends. I graduated with way too many credits and then after high school I don’t know what I did. I am doing BFA round two for what I call “crazy person music school” (Electroacoustics at Concordia), but it’s almost impossible to have a choir right now because of you-know-what. Hopefully I can join the Concordia University choir before I’m done!

I know you’ve been collaborating more often with artists like D. Tiffany and Void Mirror in recent years, what can you tell us about those projects, and what have you most enjoyed and learned from those jam sessions?

I always learn from collaborators new ways to use software, write songs, or make tracks. I find it inspiring and fun working with other people, especially when procuring ideas. Sometimes ideas can only be born out of a specific friend rapport, even my friends that don’t make music, we make a funny joke and then I make a song after. After a while, having a solo project can be hard, with no one to bounce ideas off of, especially with dance music where you are listening to the same thing over and over again, and as someone who is trying to take risks sometimes, it’s hard to know if it sounds good (or bad). And also, producing with other people is half the work!

Speaking of which, you had a cheeky little EP out on the Dublin label Pear late last year, featuring a solo tune and some collaborative tunes with D. Tiff (as Plush Managements Inc) and a track with D. Futers sampling the eternally catchy MSN Messenger sound. Tell us about the overall vibe you were going for with that record..

Each song had its own vibe, a bit of a Regfant compilation, which is kind of my thing now because I do so many collaborations. The record was a collection of tracks that needed a home. Part Girl Theme is like a chugging silly party tune, MSN is vocal ‘90s UKG inspired, and Plushied is more chilled out bedroom house, inspired by New York house (like Pal Joey or Burrell Brothers). I felt like it was appropriate to have a mood journey with this record, something for the whole family; morning, afternoon, and afterhours.

I know you’ve spoken before about aiming to find a balance between fun and sentimental with your music, is that what we can expect here with this mix? Any personal favs in there you’d like to shout out?

Hmmm.. I think this mix is pure fun but I could be conflating it with sentimental. Keep an eye out for Daft Punk and DJ Tonka. Maybe I’m a little sentimental about tracks from my own collection, because with collecting music it’s this whole experience of going places, going to record stores, listening to piles of music, hauling it home, putting it into your collection, and then taking them out on the town, so inevitably it becomes this relationship to your collection that is sentimental. But I do love cheesy music, weirdly I am very specific about what I like, I can’t even put my finger on it, it just has to be the right amount of bad, but I think if it’s produced long-enough ago, it makes it ok. I love music that you just think…. “I can’t believe someone made this… and multiple people listened to it and decided to press it onto vinyl”

As for the mix, sit back and enjoy the show! I really tried to channel a fun party vibe into this one so… get the mix on, fire up the wonderboom, wash those dishes, dance around the house, ride a bike, go for a jalk, or start a garbage can fire and roast some hot dogs.

What’s coming up to close out the year for you? Can people catch you playing anywhere IRL or online soon?

No lRL except out on the streets and at the grocery store, but I’ve got a few releases coming out. Including “Magic Plush” by Plush Managements on my new record label with D. Tiffany, Plush Records. And a Ciao single “Vibra” on Moxie’s label, On Loop. I just released a Regularfantasy single called “Running Around” on These Things Take Time. And also a trance track “Life is A Delight” on CC Disco’s next compilation for Soothsayer. There’s also a couple remixes including one for Montreal’s Kristian North, and Mousse’s next record on Pelvis. And a couple more silly remixes for PLUSH002 (Britney, Pitbull, Akon… slide into my DMs if you want some previews). I also just posted my live set from Refraction Festival on my IG (that was filmed by the wonderful Ariana Molly, of Mutually Feeling. Apologies for all the names, but some good people to check out!