After touching down in Australia for a run of shows along the east coast this month, Stockholm’s most relentless crate crawler Doc Jay blesses us with a blend of his infamously breezy bangers ready to transport you directly to a dance party on a beach somewhere in the summer of ’92. Not only is he behind the notorious Doc Jay’s Audio Inn, a mix series which has quickly become one of the freshest on the cloud and was the lockdown hero across living rooms round the globe, he’s also a crazily talented painter and visual artist, and has collaborated on a graffiti art mag with a friend since high school that has gone on to become the biggest of its kind in the world. We caught up with the cheeky Swede behind the Doc Jay moniker to ask about his art, his label Sunken Rock and the inspiration behind the Audio Inn series..

Hey Doc, what a real pleasure it is to have you here mate! How things and what’s been keeping you busy in Stockholm over the winter months?

Hey hey Myles, thanks for having me on! Things are pretty good over here in Stockholm. As for most people life has been quite on the down low for the last while due to covid so I have primarily been focusing on spending time with family and friends.

Other than that I keep myself busy through a lot of various creative outlets as I’m being a visual artist, running a record label, a magazine, making/collecting/playing music and so on.

Most recently my time has been spent getting everything together for my latest solo show with my art that was up a while back. Since then, I’ve been sticking my head down in various music projects that I’m currently trying to finalise. 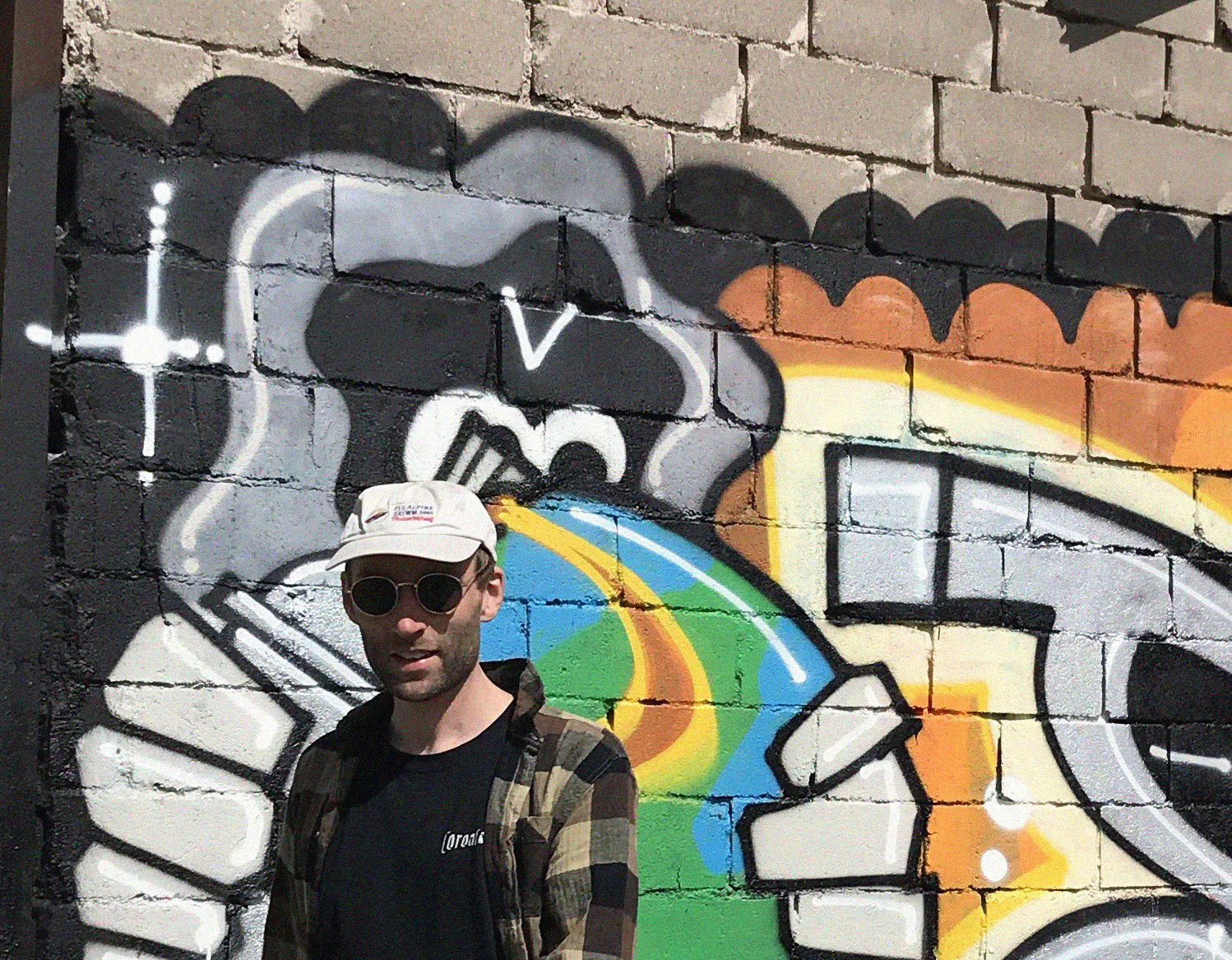 Many people out there would have become familiar with your sound through the wonderfully quirky ‘Doc Jay’s Audio Inn’ mix series on Soundcloud. Tell us how the idea came about to host the Audio Inn series on your own page.. It sounds like it has become a great personal musical outlet for the alter ego where you can dive deep into your collection and explore different themes without any real rules or limitations..

I’ve always been collecting quite a wide range of sounds and somehow always wanted to find a proper outlet where it could all fit in together. The idea for the Audio Inn format was to somehow create a place that would be some kind of “meta” universe for myself. A fictive spa-resort far away from everything, where I live, make music, graffiti and art, relax and just enjoy life. A real teenage dream! 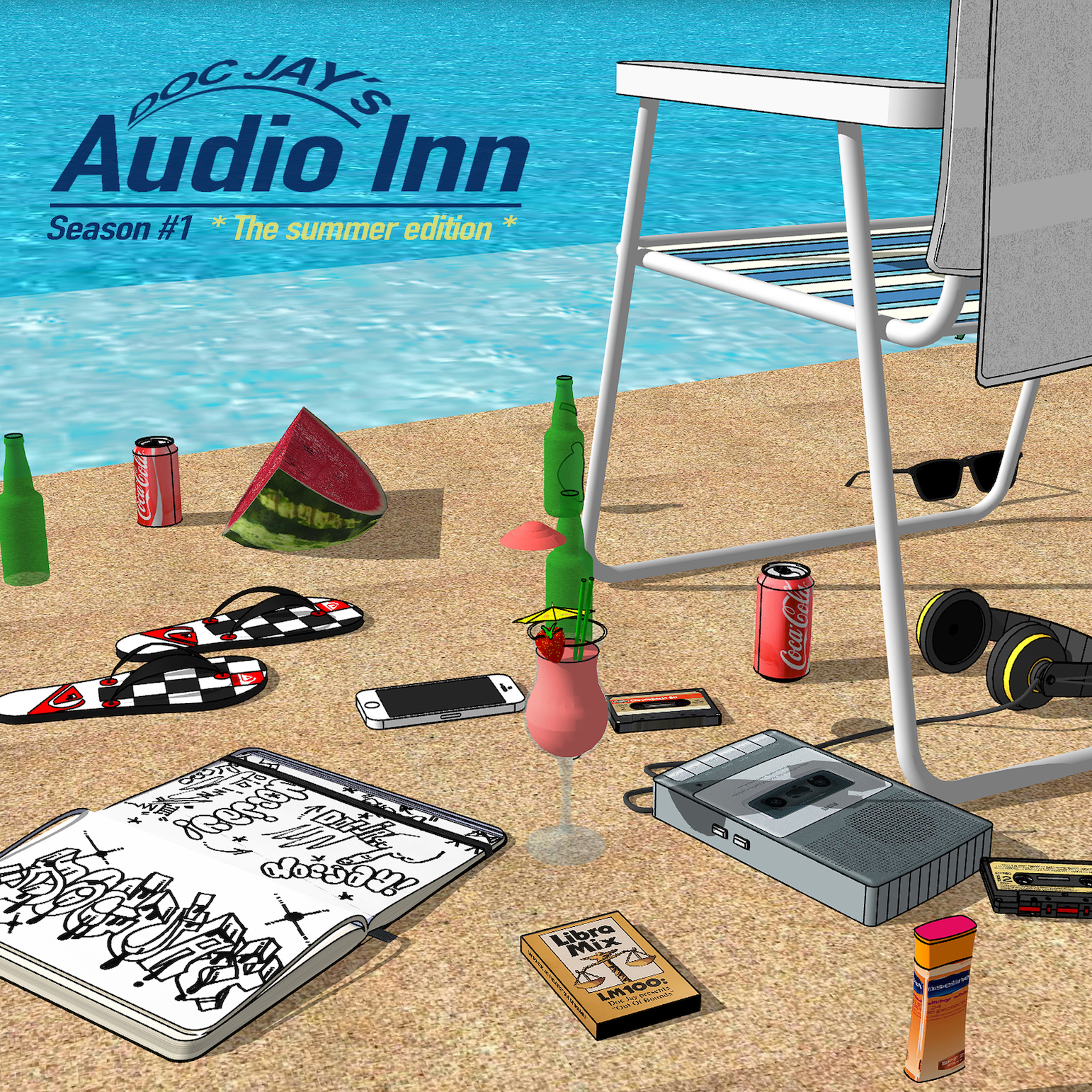 Another cool part of the Audio Inn series is the funky episode artworks that you create for each show and the robotic voice over announcements heard throughout the mixes.. Tell us a bit about your creative process for making the designs and voiceovers and what or where might you draw your inspiration from?

This feels like ”THE” old-school cliché thing to say, but what really was a big change for me was when my older cousin gave me a cassette mixtape he had put together with some underground club music that was so far ahead of everything else I had ever heard.

To me this was such an eye opener and I just loved that mysterious feeling of hearing these crazy, homemade-sounding tunes without any context whatsoever.

Later on, I used to listen to Benji B on BBC Radio One, year after year after year. There is just something with the radio format that gives something extra to the music I find. The jingles, the voiceovers, the variety of styles and moods. It just gives it a nerve somehow.

Eventually I guess I just felt I wanted to make my own fictive radio station, where all the styles I love could fit in. Generally I just wait until I feel I have a theme I want to make a story from. It doesn’t have to be obvious, but usually I just have a certain vibe I would like to make into an episode.

The artwork for the episodes is really inspired by aesthetics I grew up with. Mostly by all these euro dance cd compilations and computer games I used to play. Maybe some nerd remembers Little Big Adventure? – My favourite game of all time. Also, games like Starwing, Grim Fandango, Theme Hospital, Donkey Kong Country, Alone in the dark, Parappa the rapper and The Sims. I´m just a sucker for that early 3d computer game art with that kind of smooth, yet stiff and kind of empty vibe. 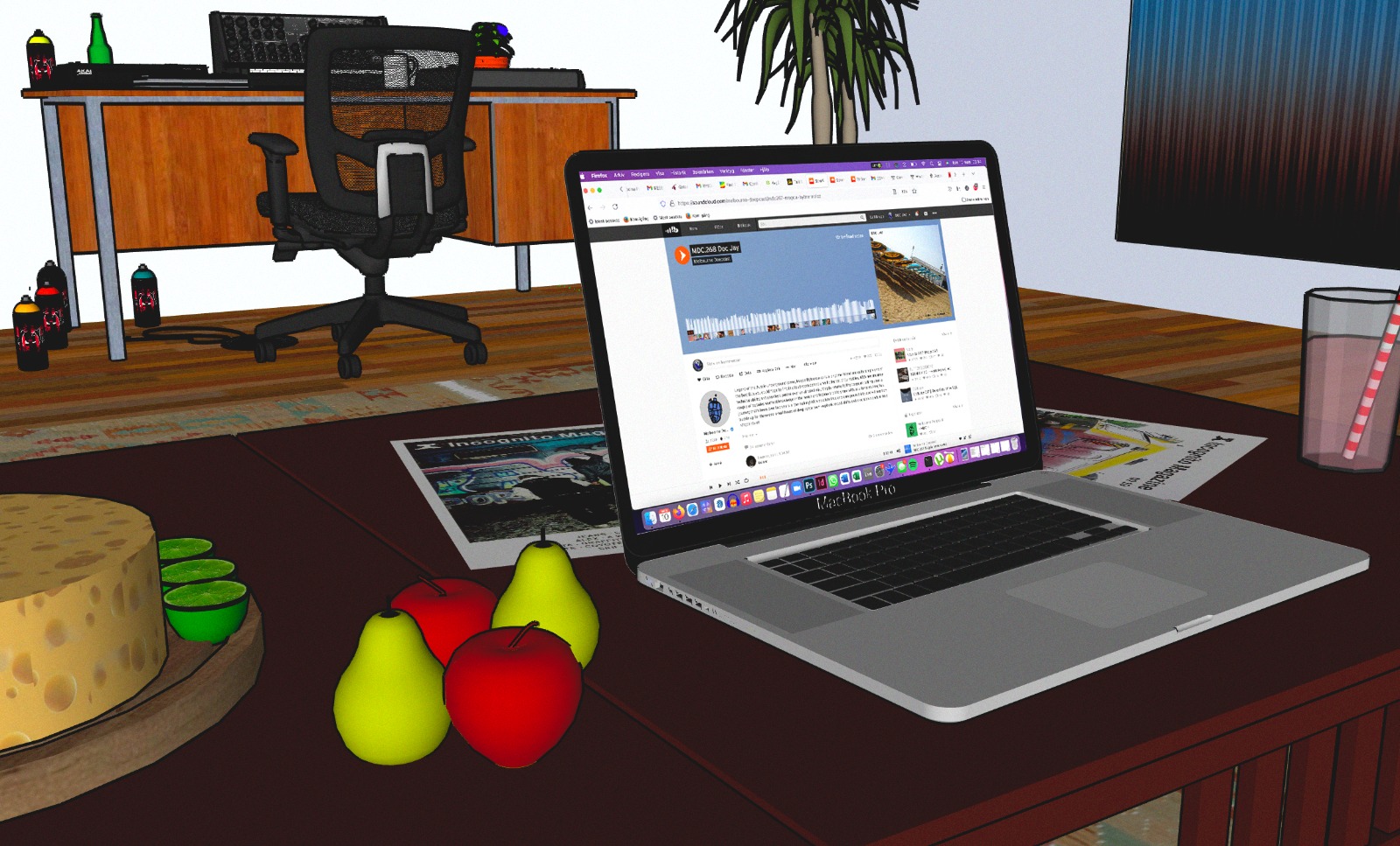 It seems like you’ve also forged some nice musical connections through your artworks having designed a record sleeve for Pender Street Steppers on the Mood Hut label and then recording a special cassette version of Jack J’s great Libra Mix series for their 100th episode. Tell us how these came about, and are the designs something you would like to do a bit more of if you had the time?

A few years ago, I was painting a lot of graffiti with this really wonky style I came up with, where I did all my letters and characters in this kind of clumsy-bad, pixelated style. I had a ton of fun with that stuff, and I sometimes also pushed that into artwork for shows and such. I guess Jack and Liam were into it, so they asked me if I wanted to make the artwork for their upcoming EP, which was a real honour as that record is still such a killer.

Regarding the Libra Mix cassette, I didn’t create the visual design for that one but Jack just asked me if I wanted to make a mix for the project that he later decided to put out as a cassette to celebrate the 100th episode in the series. A real honour as well!

But to answer your question if I would be into focusing more on design, it’s a tricky one. I actually went to prep art school because I thought I wanted to become a graphic designer, but later on applied to the art academy instead, as I realised I really find it stressful and not very stimulating trying to please other people with your creative work in the way you have to do it as a graphic designer.

But over the last years I started playing around with designs again, and who knows, eventually I might step it up…. 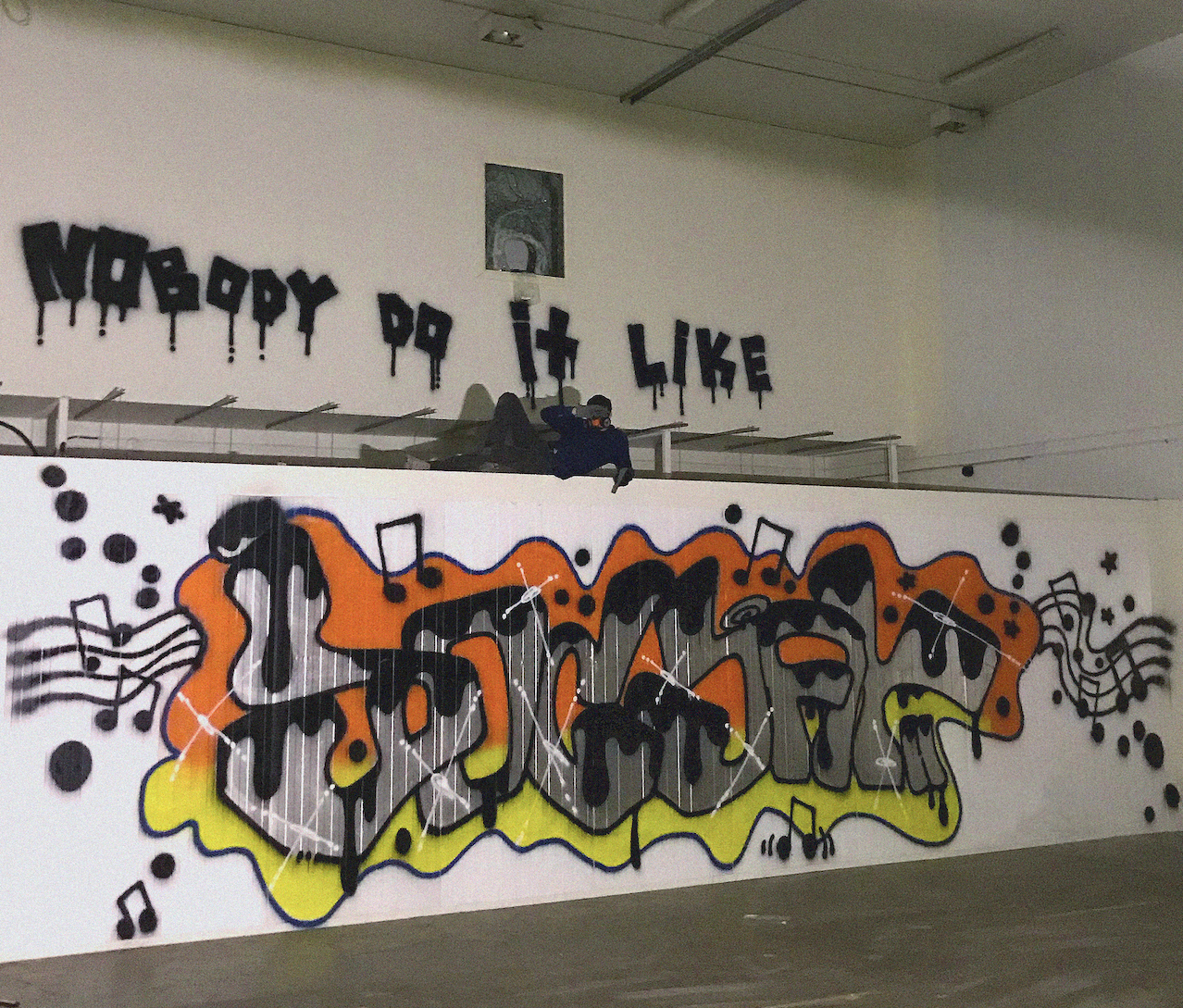 Tell us what is the latest with the Sunken Rock label you have been running alongside Mount Analogue and Förslag På Musik in Stockholm, I see you guys have had a little break in releases over the past year or so, do you have any plans to keep releasing music of your own or from other friends on the label again this year?

Sunken Rock is a project that started off at the art academy in Stockholm. Three guys with a big passion for weirdo dance music but no musical training whatsoever met and formed the label. Our aim was to release projects that didn’t need to tell a logic story, trying to please an audience or just sounding “as it should do”.

To me when I listen to new music being put out today it’s crazy how everything is so on point. Everyone has the “right” artwork, the “right” breakbeat, the “right” sound and the exact balance of this and that. Everything looks and sounds so dope, but at the same time I often don’t feel a person is behind it. Maybe I’m just very negative here but to me a lot of the things that I see being put out these days feels like it’s been done by an automatic “dance music” generator both in terms of visual aesthetic and sound. I think the fact that everything is so accessible today makes it hard not to get too influenced by everything else and just get sucked up in this repetitive loop where everything is just a clear reference of a reference. 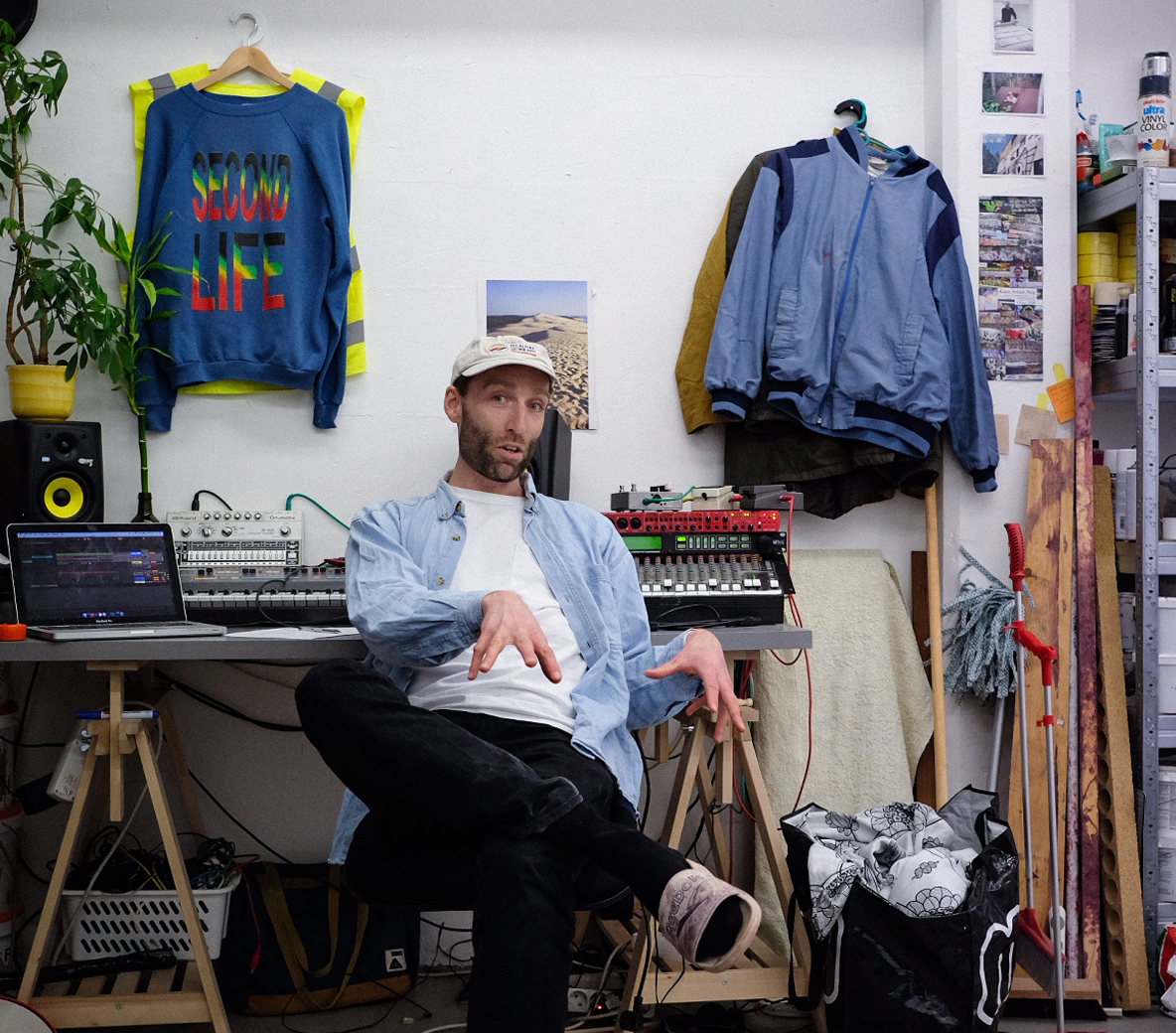 I really believe in the idea of seeing your flaws as assets instead of trying to change yourself to fit into the format and try to embrace your quirks into something that stand out in its own way. And to get back to the question here, I guess that’s been our motto with the label somehow. Not to be the coolest contemporary thing out there, but to be a place where experiments, ideas and personal flavours get to exist and take a risk regardless if they turn out to be super successful or not.

That is the kind of music I buy myself. Songs that doesn’t have to be mixed really well or sounding very good. For me it is all about honest, personal ideas.

For the last while our output has been a bit slow, but a new 7” is going to be out and about within the next months and there are a lot of really exciting projects bubbling so hopefully a whole bunch of stuff will be out in a bit.

As for my own production I tend to take it very slow releasing things, and I’m generally fine just using music I make for my mixes and playing out, although I will most likely have a new EP out later this year. 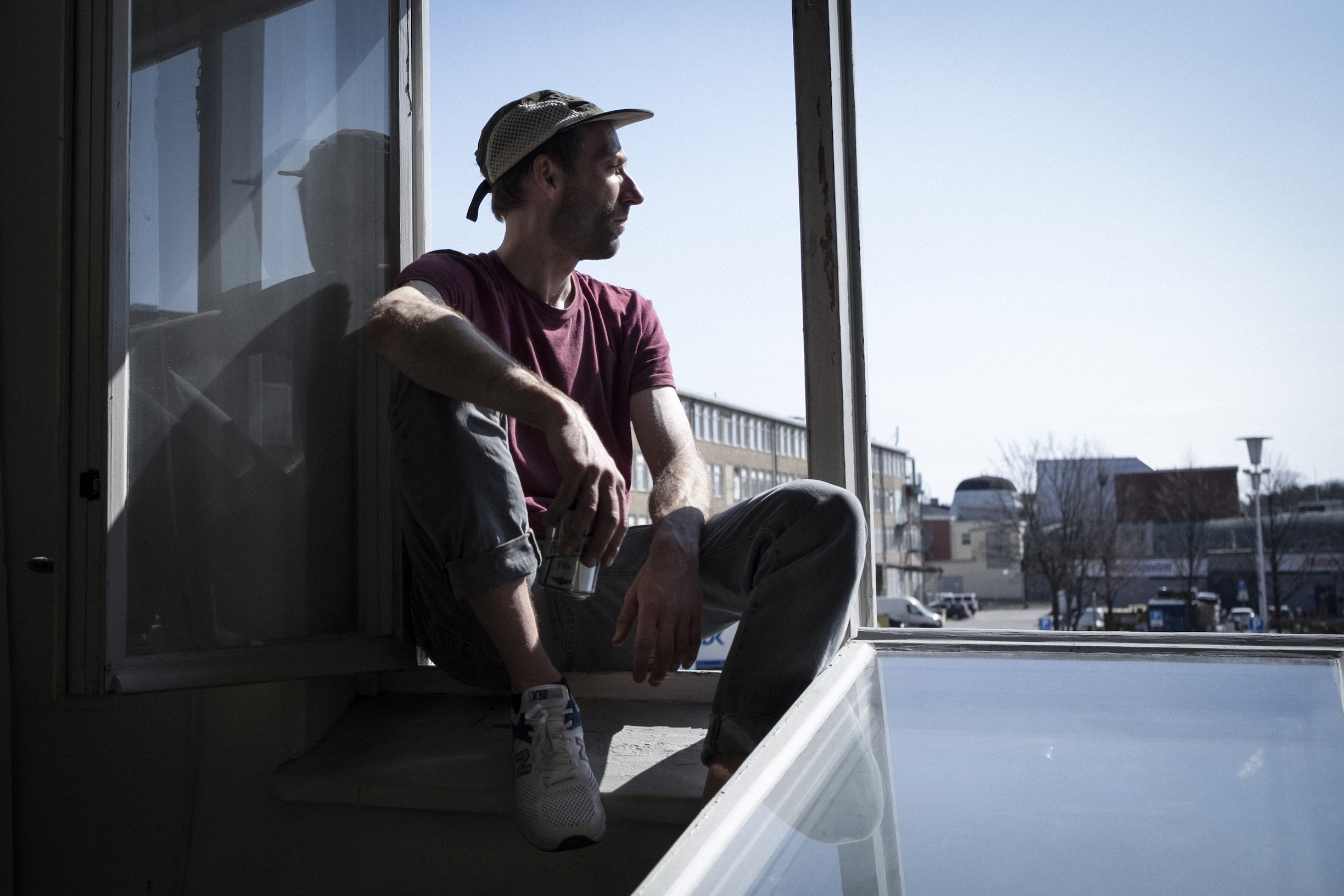 Tell us a bit about the mix you’ve created for us here, what kind of vibe were you going for and are there any personal favourite tracks in there you would like to give a shout out?

For the last while I mostly been into bubbly, up-tempo stuff. Classic 90s house with a slight quirk here and there. Things that just go straight to the point without any fuzz. I guess after all this time with isolation during covid I’m just really excited to play things that make you move, laugh and feel hyped to.

If I have to pick one track that stands out for me I go for this great tune by the don, Mr. Monday named “Appreciate” featuring some really great vocals by Debian Curry. A track I always play in my sets as it is just such a feel good classic for me personally. 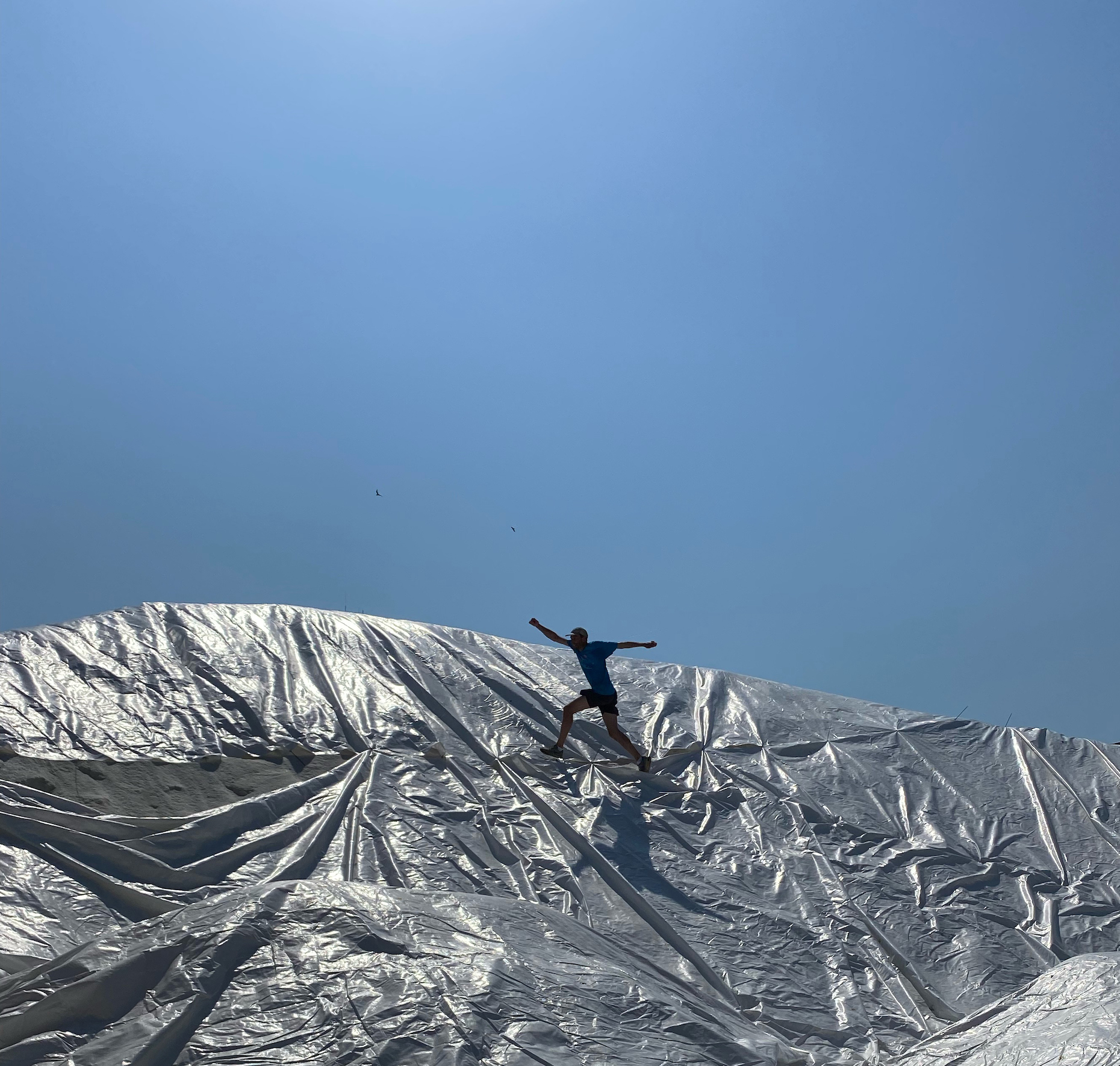 And finally, you’re arriving down here next week for your first ever Australia tour! What are you most looking forward to checking out while here and where can people catch you playing?

Since this is my first time ever in Australia I’m just generally excited to just get a vibe of the people and the surroundings. Everyone seems to be really nice; the surroundings and architecture looks really sweet, and I heard the food is supposed to be super as well. Add a few degrees to the temperature compared to the slushy streets of Stockholm and I can’t see anything not to look forward to!