Live from MUTEK with Montreal's master of chill.

Freshly lifted from his recent performance at Montreal’s wonderfully programmed MUTEK Festival, local production king Alex Sheaf gifts us the very first glimpse at a Dust-e-1 live set for the latest in a string of killer Canadian editions!

Unable to put a foot wrong at the moment, whether it be through his freshly minted label DustWORLD, various collaborative efforts or his own tasty works ranging from 100bpm deep chillers to hard out euphoric jungle tracks, he always seems to know what’s up!

Here we find the Dust-e-1 easing his way through psybient mind-chill and broken downtempo jams to the kind of liquified acid and pace friendly atmospheric house he’s become known for through records under names like ANF with Priori and Perishing Thirst – the incredible rave band he heads up alongside Montreal based musician friends Cassie Johnson and Markus Stahl.

We suggest you put your feet up, crack a refreshing ale and enjoy the ride!

Hey Myles, thanks for having me on MDC! I’m doing great, just enjoyed a weekend in NYC and hosted Big Zen/Jamie at THCity the week after. We make music together as Killer DJ’s and got to track out in my studio one day, made some really dope stuff. He’s back to where he lives (Vancouver) now, I wish we lived in the same city.

You kicked off your own label DustWORLD with a supremely lush debut four-tracker from your good self. Tell us about the inspiration for that record, the label and what else you might have planned for it going forward?

Thank you! Yeah super happy with how this EP turned out 🙂 It’s very much a summation of my influences – prog house as a teenager, formative dancing experiences, the work of my talented friends and trying out new things in the studio. Super jazzed for the future of the label, aiming to do 3-4 releases next year, up next/out now is a 4 tracker from Big Zen/Jamie. Big S/O to my friend Sverre Brand who’s been nailing the artwork, he’s been a pleasure to work with!

You’ve also been releasing some incredible atmospheric dance music alongside fellow Montreal production wiz and NAFF label boss Priori (Francis Latreille) since last year as ANF, releasing on both NAFF and Pacific Rhythm, how did that collab come together and what does a studio session with you and Francis usually entail?

I think it was May of 2017 that Fran & I fortuitously ended up at his studio one afternoon, then in the back room of the notoriously leaky Casa Di Ruffino. In that first session we banged out “The Surface” and within the next 3 we’d finished what became our first EP “Visions” (NAFF 002). We were pretty diligent about meeting up and making tunes over the next 12-18 months, bonding over different influences, trying out new approaches. The weather plays on your mood so much in Montreal as well, slipping into winter particularly impacting our sounds. We’d usually grab a bite at some point, make tea. PR006 and NAFF005 were born out of that time and I look back on it all so fondly. A lot of self-realization and learning went down – “I love music and am not bad at making it too!” It was a cool feeling. Love and thanks to Francis for all the fun & memories. 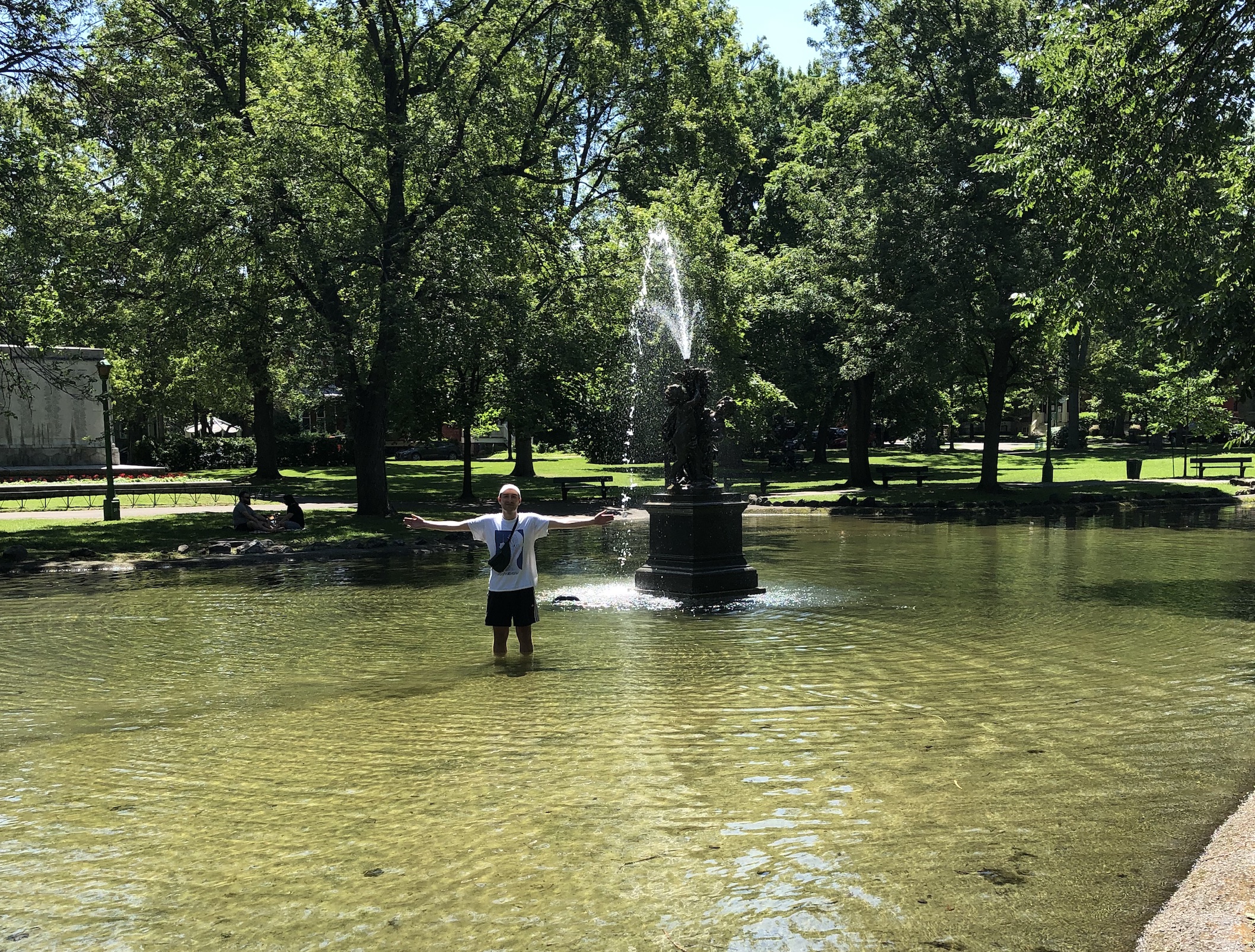 Last year we also saw the debut offering from Perishing Thirst – the rave band you head up alongside friends Cassie Johnson and Markus Stahl – with your first LP Pilgrims of the Rinde one of the freshest deep electronic albums we’ve heard in a while.. How did the trio come about and who are some of the artists or labels etc that may have inspired the wide-ranging collection of atmospheric sounds you guys create?

Thanks, Myles! Perishing Thirst was a product of collaboration between myself and my friends Markus and Cassie. Markus and I would write tunes at either my home studio (T.H.City Studios) or his and then record Cass’ vocals, along with a bit of Markus’ and even a bit of spoken word from myself. I was showing demos as and when they were being made to Francis & Adam which they thoroughly enjoyed and expressed an interest in releasing. Eventually we had enough material for an LP, spent many an hour mixing with Francis and got in contact with a UK based visual artist called Dom Sebastian, whose work we used on the cover. Markus is a classically trained musician playing in a few different bands, Cass has a fantastic voice and I am a studio noodler, we were able to find a really strong common ground and develop conceptual themes to underpin our work. Was also had a very special time and we remain pilgrims for life…

Your first couple of EPs under the Dust-e-1 name came in the form of some crazy euphoric percussive jungle and bass heavy breaks for EPs on Lobster Theremin and Collect-Call. What was the general approach with those cuts, and when might the junglists out there be able to hear you on that tip again?

Yessir! Those tunes were written in 2016 and 2017, maybe some in 2018 as well. Making Jungle is very much like writing computer code (a lot of the people I know who make it best work tech day jobs), there is a certain underpinning logic and it can all feel pretty protracted at times. I had a clear schedule and was completely obsessed with the subculture at the time of writing, so managed to make it work, but I haven’t been in that zone for years now. Would love to get back into it, I really wanna make a truly great tune (a la T-Raenon or w/e) but I wouldn’t be able to put a timeline on when trying may or may not happen. Here’s hoping though, it’s so so powerful.

You’ve shared a recent recording of your live set for this podcast.. tell us how the response and general vibe was at MUTEK where you performed it, and what kind of setup you were using? Can we expect any of these particular cuts to land on 12-inch any time soon?

Ya! It was a blast to play at MUTEK this summer! I did so on Friday around 6 pm at the outdoor stage, sun was streaking out over the plaza (see picture below) and people were filtering over from work, lying down on the floor and vibing, getting their evening going. The mood of my set catered well I think, very happy with how it all turned out! My setup was using one of my three laptops, midi controller and a recently acquired synthesizer. 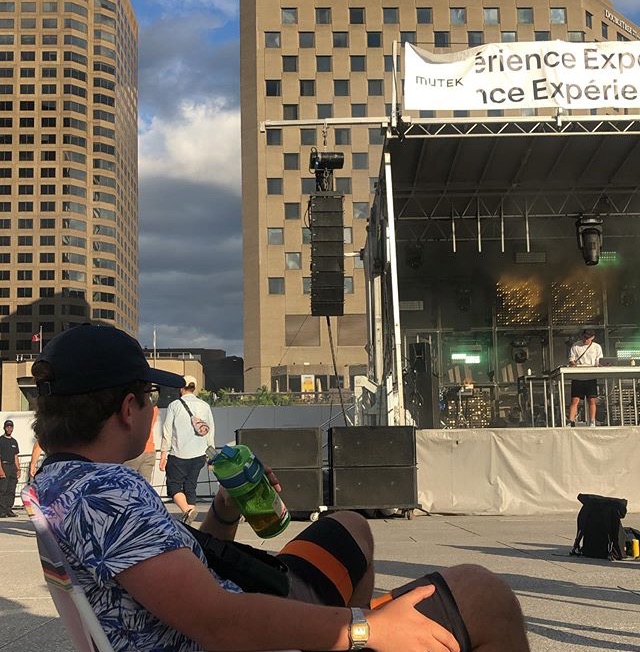 After thinking and working on the set for many months, it all came together the week before – finished up some old ideas and jammed out a bunch of new ones. That’s how things tend to go for me, many months of thinking and not really doing much, then a week or so of frenzied activity, getting stuff done. One or two things will be out at some stage but the large majority probably won’t? I’m not sure really… we’ll see.

A big shout out to my friends, family, Frankie & Tiggy!